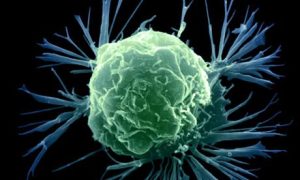 Mid-December 2003. Hot shower on a cold day, steam filling the shower stall – I felt it. A lump about as long as my thumb and twice as wide in my left breast. Terror.

I sat with that for a while, reminding myself that most of the lumps that women find by themselves are anatomic structures within normal limits. After a week or so, I decided to face my fears and go to my GP. It was only a few days until the appointment, but it felt like forever. My fingers kept straying to the lump, feeling its edges, comparing with my right breast in the vain hope of finding a similar lump there. (That would mean it was anatomic and not cancer.)

Appointment with my GP. He confirmed that it was not a normal finding and sent me to my first mammography. I went, still hoping that everyone would laugh at my silly fears, that there was nothing wrong, that I would feel sheepish but healthy. The mammo technician told me to take a seat in the hallway (not the waiting room) as she brought the films to the radiologist. A minute or two later, he called me in for an ultrasound.

The doctor performed the exam, and it seemed to me that he was taking an especially long time. I saw him taking measurements, capturing screen shots.  The exam over, he looked at me gravely and sighed. “We’ll have to do a biopsy.”  I took a deep breath and asked The Question, using The Word for the first time. “Is it cancer?” “We’ll have to do a biopsy.” “But what do you think?” “I can’t say anything without a biopsy.” He looked so grave. Recalling what little I knew of ultrasound images of tumors, I asked, “Can you tell me – are the edges of the lesion regular?” “No.”

If I hadn’t been supine I would probably have fainted. He told me that they would hold on to the films (usually we receive them and take them with us to other consultations) and he walked me out to the reception desk, where he told them to make an appointment for the biopsy.

I felt like I had been kidnapped. Already, I felt that my autonomy was being diminished and that my choices were being taken away from me. These feelings would continue during the first years of my life with cancer.

At the time I was living in an intentional community based on religious principles. I didn’t feel that I could go home yet, but I didn’t want to be alone. I went to see my priest at his home. He let me in, knowing nothing of what was going on. He seated me at the dining room table, asked if I wanted something to drink.

He sat across from me. “I have breast cancer.” His face dropped, his eyes widened. He said nothing, but I felt that he was very present to me. “We have to wait for the biopsy, but there is not much doubt.” He remained silent, and so did I. We sat there, and I started to cry silently. “I can’t do this,” I said.