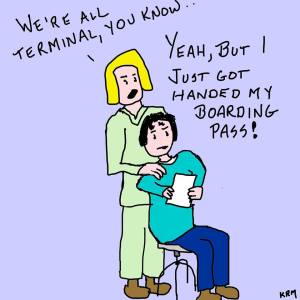 Image Credit: By cartoonist Kate Matthews. Check out her work at http://www.facebook.com/cancercartoons Used with permission.

Will it surprise anyone that death and dying are fairly often in my thoughts? Not in a morbid way, but as an event I will soon attend, a fact of life, the next step. I’ve written several posts about it. My favorites are Living in an Undefined Space, It’s not death, it’s the dying, and One Advantage of Dying?

Perhaps that is why this cartoon spoke to me so loudly. Yes, people do say that to people with advanced cancer.

They are not mean-spirited people or cruel or pathologically self-involved people. Usually, they are people who love me, who don’t want me to be depressed or morbid, who are trying to cheer me up. It isn’t a horrid thing to say, but it is, I’m sorry to say, misguided and, however unknowingly, disrespectful of my situation and my feelings about it.

I don’t think anyone would seriously claim that the awareness of death experienced by a person of average health or a person who has a chronic, non-lethal disease is the same awareness as that of someone who has a disease that is fatal and cannot be cured. Metastatic breast cancer (MBC) is “managed” but there is no medical cure. It will kill us. It will kill me.

So what does that mean to me? How does it affect my life, my decisions? I’m not talking here about limited ability to perform activities of daily living (ADL) or about quality of life impaired by pain, anxiety, treatment side effects, and so on. I’m talking about the awareness of the relative imminence of my death: what does that do to my inner world? How does it affect my life choices day by day?

The biggest effect, I think, is that more than ever I am striving to be kind to people. Kindness is greatly under-rated. I don’t think I’m much different from other people in finding it much easier to say “I love you with the love of the Lord” (or whatever) than to do something kind for someone who may have hurt me. Yet acts of kindness speak much louder than words.

A friend of mine gave up most of her free day today to accompany me on my first walk outside the house in months. That was kindness. Other friends take time to email or text me encouraging or funny little messages. That is kindness. Just “being nice” to people is kindness. It’s easy when it’s someone I like. When it’s someone about whom I feel indifferent or even dislike – whoopsy! That’s a whole ‘nother thing!

A couple of weeks ago, my then household help broke something, a pyrex bowl with cover that I use quite a bit. He told me about it, and my first reaction was frustration and even anger. I took a breath and decided to be kind instead of angry. He didn’t do it on purpose and he knew he shouldn’t break things. It was an accident and he didn’t need me to make him feel bad about it.

“Oh well,” I said. “Be sure to clean up all the little bits. Pyrex is a bear when it breaks.” And that was that. I chose kindness over anger. Neither option would change the reality of the broken bowl, but a kind response is a concrete way to show that I value people, value that young man, over a glass bowl.

Valuing people and letting them know I value them is another area of concentration for me since my MBC diagnosis. Being kind is part of that. So is being polite, not blaming people for things that are not their fault and not going overboard when they are at fault. It’s a question of priorities. Which is more precious: my late pizza delivery, a broken bowl, a mistake in my grocery order… or the person I am talking to?

Of course I get angry and frustrated; I’m not pretending that I don’t. All I’m saying is that I am learning to prioritize the more important over the less.

In a novel I read once, an old woman said, “I wish I knew when I was going to die.” The people around were a little shocked and asked her why. “Because then,” she replied, “I should know what book to read next.”

Jerusalem is a multicultural city, and I have friends and contacts of different languages, religons, ethnicities and cultural traditions. People who live in more homogeneous settings sometimes find it confusing to move among cultures. I was discussing this with a friend recently. Being a person who writes (and talks) to figure out what she thinks, I was listening to what I was saying to see how I deal with the situation.

(Have I made sense yet?)

I heard myself saying that good manners just means putting the other person before yourself, or appearing to do so, and if you do that you’ll be pretty safe anywhere and with anyone. I think that’s about right.

Men in the ultra-Orthodox Jewish community here avoid physical contact with women who are not related to them. When I am introduced to a man in that community, I don’t offer him my hand. I once met an archbishop from one of the Eastern Orthodox churches, and for some reason I was unsure if he shook hands with women or not. So when we were introduced, I hesitated for a moment and watched him for small signals of what he was expecting. He kept his hands clasped over his pectoral cross, so I took the hint.

On the other hand, I am not into kissing strangers. In fact, I really dislike it. However, in some of the French circles I am involved in, it is not at all unusual for new acquaintances to kiss you goodbye fifteen minutes after they meet you. Again, I watch the signals. So as not to make them uncomfortable, I go ahead and offer my cheek and kiss the air next to their ear. (Of course, if they were watching my signals, it wouldn’t happen at all…)

In some cultures it is rude to sit with your legs crossed. I am not aware of any culture in which it is rude not to cross your legs, so if I’m not sure, I just don’t do it. Some cultures have intricate rules about how men and women or superiors and inferiors or older and younger people interact. It is pretty much impossible for an outsider to know and follow all these unwritten codes, so how does a person who is interested in interacting with all kinds of people behave?

The way I do it is to try to be kind. For the last fifteen years or so (at a guess) kindness has been the personal quality that I have been working on cultivating and developing. I am not particularly good or holy or wise or brilliant or generous, and I’m not sure how to become those things. But kindness is behavioral; I can work on that.

As it turns out, being kind and having good manners are very similar in many ways. It’s just a question of thinking of the other person, of putting their comfort, needs and desires, before my own. “Just”. Okay, this is one of those simple things that aren’t easy, but it’s possible to work on it, to come closer and closer to this desired goal.

As the tshirt says, “Please be patient. I’m a work in progress.”

Want to talk? Here’s how:

You're in good company!