I am not very good at the language of art criticism or of feminist deconstruction, but I’m giving both a shot in this post. Earlier this week I had to have some studies done at the imaging center of the breast clinic of a local hospital. (Results: Everything is pretty much the same, but the radiation several years ago caused annoying changes in some of the bones in my chest; also my liver is an iffy character and we need to keep an eye on it.) I am not writing today about the tests or my anxiety. I’m writing about this poster. 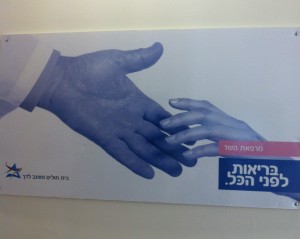 The words are not the problem. Lower left – hospital name (Misgav Ladach) and logo. Lower right in the pink block “Breast Clinic” and in the blue, “Health First”, the hospital’s slogan. The offense is in the images.

At the left we have a man’s left hand extending from a crisp, white sleeve, looking unnaturally large in comparison to the woman’s. The hand is open, thumb extended, fingers straight. This is a position that requires intention and muscle tone.

At the right, on a lower plane, is the little woman’s right hand. Is it really a woman’s hand or that of a child? The size disparity between the two hands is striking. Does that really look like an adult’s hand? It does not to me.

The woman’s hand is limp and lacks muscle tone or even any sense of intentional movement. It is not reaching out for help or grasping at offered assistance. It is just… there. Passive. Waiting.

The man’s hand extends from the top left of the poster to the center, which it occupies. It is the focal point of the image. The woman’s hand continues the line drawn from the man’s, but disappears into the text that covers it. We see all of the man’s hand, his wrist,  and some of his sleeve. We see four of the woman’s fingers (well, three and a half); the rest of her hand is covered by text blocks. In other words, the important, central figure of the image is the man’s hand. The woman’s hand is an accessory.

Again – this poster was hanging on a corridor wall in the Breast Clinic of a local hospital. The hospital’s history might be of interest. Founded in the latter half of the 19th century, for most of its life it was a major maternity hospital. The name is from Psalms 9:10 (9:9 in some translations): “The Lord will be your refuge, a stronghold in times of trouble”. The literal translation of Misgav Ladach, which, to be fair, hardly anyone thinks of any more, is “refuge for the downtrodden”.

Come to think of it, the poster makes the point fairly well.

I don’t intend to do a feminist deconstruction of the phenomenon; I just wanted to point out that I am appalled. These images reinforce the idea that women do not deal with the realities of day-to-day life in  21st century industrialized countries, that they are passive and that they are objects to be given as gifts. I am seriously annoyed.

Right. Enough of that.

Yet again I am faced with the problem of getting more CT scans. It is a problem because 1) the “sick fund” (the Israeli version of a health maintenance organization) to which I belong only works with one imaging center. 2) That imaging center will not accept patients who are allergic to iodine, whether or not their own physician does the prep and whether or not the test requires iodine. 3) I am allergic to iodine.

Now, I know that I could get the sick fund to send me to the imaging center that will accept me. But I also know that this would take time and would involve a lot of emails and faxes and phone calls and meetings and calmly-and-patiently-yet-firmly insisting on my rights… and, quite frankly, I don’t have the energy for all that. So I’ve decided to just pay for it out of my pocket.

How does this make me grateful?

All in all, I am grateful today.

Late news – Arrangements are all made; I’ll have the scans Monday afternoon (in three days’ time). 🙂

Want to talk? Here’s how:

You're in good company!